The Motor and Controller

Probably the two thing that everyone asks about the most.

Typically in EV conversions, a series wound direct current (DC) motor is used. Many years ago, used airplane starting motors were used. Nowadays with a quick Google search you can find hundreds of different motor options on EV conversion websites.

I started hunting for a motor with a tight budget in mind and I ended up finding a used motor from the east coast USA somewhere.

Apparently it came out of some sort of industrial equipment. It is rated for 72V. However, when it arrived I soon realized that it is not a series wound DC motor. Instead, it is a separately excited (sepex) DC motor. What does this mean?

Unfortunately, I had already purchased a used motor controller off eBay, an Alltrax 7245. 72 volts and a peak output of 450 amps. 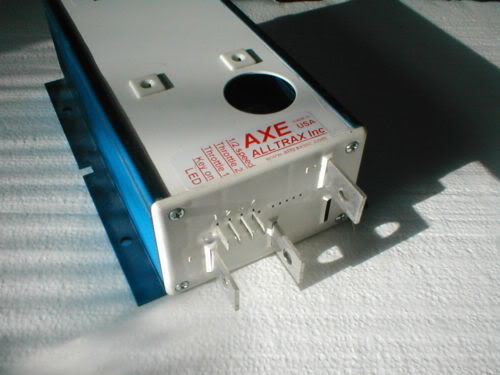 This controller is meant for a series wound DC motor (or permanent magnet DC motor) because it only has one pair of motor terminals. It can only control current on one circuit. Here you can see the problem: with a sepex motor you have to control the current on two separate circuits.

Part of me wanted to purchase a sepex motor controller...until I saw their prices. The cheap (frugal?) part of me decided to try to make do with what I already have. With a whole bunch of research I have concluded that putting a constant 12V to the field windings (which will draw approximately 10A) and controlling the armature winding current with my 7245 controller should work. Should work.

Then [of course] I got thinking. Sepex motors have an advantage over series wound motors because of more control over the armature and field circuits. So what I am planning to do is to power the field with a switchable voltage - say 12V and 24V - with a toggle switch on the gear shift. Higher field voltage will produce more torque but less speed. Lower field voltage will produce less torque but more speed. Almost like an electric gear shift, no? I guess I will find out the hard way....
Posted by James Voth at 3:43 PM