What Gear To Start Off With

First or second, that is the question. First is quicker off the line but the shift to second takes some time. So which way is quicker? Armed with curiosity, I took a video with my (cough...hands free...cough) smartphone to compare the two ways of starting off from a stop:
So it is a tie. 0-50 km/h takes 13.5 seconds with both methods. The quicker acceleration of first gear is exactly offset by the time it takes to shift to second gear. And since starting off in second is easier, that is what I will do from now on.
Posted by James Voth at 4:40 PM No comments:


Having a functional tachometer in an electric car is amazing. I cannot believe I didn't do this before. It makes driving 100% more enjoyable.

1. Downshifting without a clutch is now slicker than goose poop because you precisely know your "blip RPM". Try blipping the throttle on a motor that you cannot hear. That was me before. I suppose that for those who keep the clutch in their EV conversions this is not an issue.

2. I now have figured out my power curve and shift points. I used to guess before based on vehicle speed. Now I do not have to. Peak power is at 3400 RPM. I can tell because of the sudden slight lurch of power and drop in battery voltage (a few tenths of a volt) when the Alltrax reaches peak output voltage and goes into bypass (which is another reason I love my Alltrax controller, because it has an internal bypass making it nearly 100% efficient at peak output). It is pretty much out of steam by 4000 RPM. By 4500 RPM it is really not accelerating anymore. I can now shift by RPM instead of by vehicle speed.

As you can tell, the Electric Booger is running better than ever and I am very happy with it. Thanks again to my Ecomodder.com friend Darin (MetroMPG) for giving me this series wound motor. Well, "giving" is a strong word because the deal was that I now owe him a case of home made beer. So in my garage is 6 gallons of a very dark, highly hopped ale. 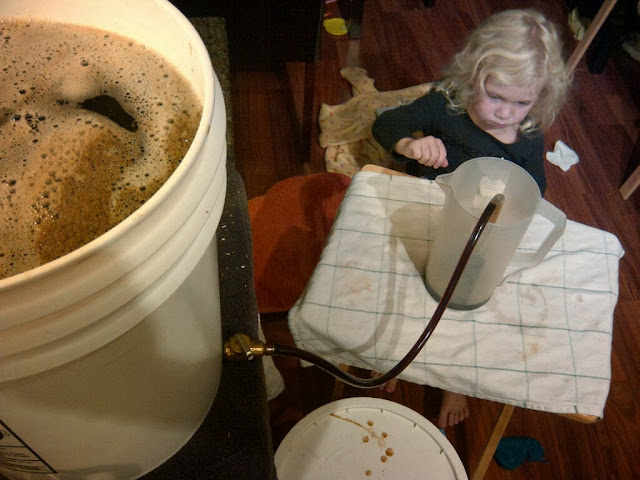 This graph will keep updating as I continue to fill out my fuel log on ecomodder.com.

Posted by James Voth at 8:58 PM No comments:

Before And After Pictures

Here is what it used to look like under the hood: 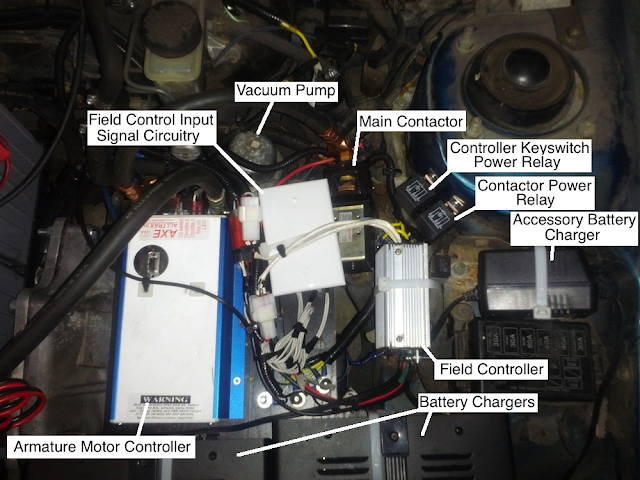 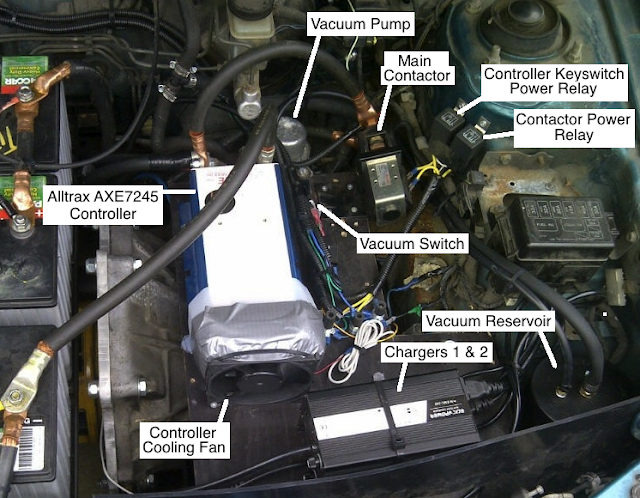 A little bit cleaner and simpler.
Posted by James Voth at 7:11 AM 1 comment:

First Commute Of The Fall

Today was D-day. I finally decided to put insurance on the car after a week of soggy motorcycling to work.

It was rather uneventful. No breakdowns and not much excitement.

The new motor definitely has more torque than the old one but runs out of steam at a lower RPM. Math would obviously dictate the lower RPM as the HP output is nearly identical because of the limitations of my controller, and HP = (FT-LB)(RPM)/5252. Actually it might now have slightly less power because I am now missing a field controller that was putting another 2500W into the old motor as well. But it sure didn't feel less powerful once I realized that I needed to shift at a lower RPM.

I am still getting used to the new power curve. An example of this is on the way home, going up the mile long hill with the 4-way stop in the middle. Today after the stop (still going up hill), it topped out at 53 km/h in second gear at 4100 RPM. The old motor would top out at 60 km/h in the same spot. But with the new motor all I had to do was shift into third (2700 RPM) and it then accelerated to over 65 in no time.

The throttle response is now much much nicer. Throttle angle seems to be more proportional to torque output, where before it was proportional to motor RPM, almost like a farm tractor throttle. And the oscillation caused by two controllers fighting over who is boss is now gone (because I fired one of them!).

When I got home, where the old motor would be about 150F on the body thanks to the climb up the hill, the new motor wasn't even warm to touch! Either this motor is more efficient or its increased mass is acting like a giant heat sink.

Today I fixed the vacuum pump relay chatter problem. You can hear this chatter in the previous video I posted. All I did was plumb the vacuum switch directly into my new vacuum reservoir instead of into a tee between the reservoir, pump and brake booster. Problem 100% solved. The reservoir dampens any pulses before they get to the switch.

Here is the vacuum reservoir I made out of a piece of ABS pipe and some end caps: 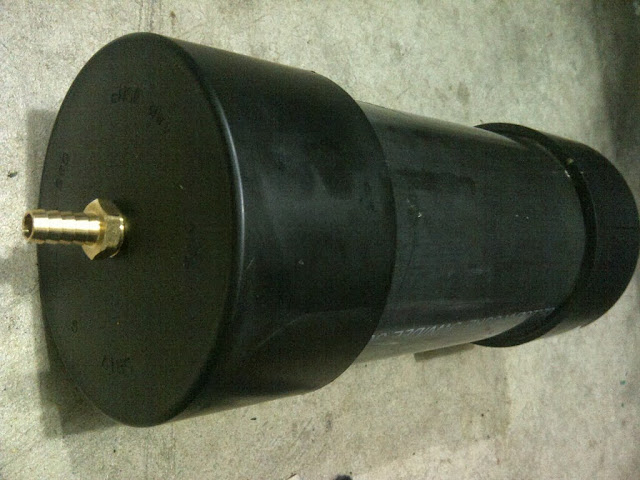 And here you can see how it now resides in a nook in the fender: 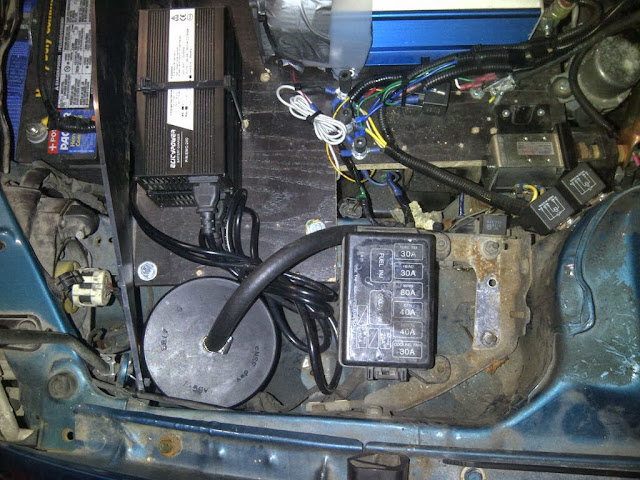 Of course with my new vacuum switch fix, it now has another small line running into it that the picture doesn't show.
Posted by James Voth at 1:30 AM No comments: