The other day I went out and bought the $10 blow dryer from Canadian Tire. I dissected it to get the heating coils out of it. Built into the coils is a bimetallic temp control switch and a thermal fuse for safety. 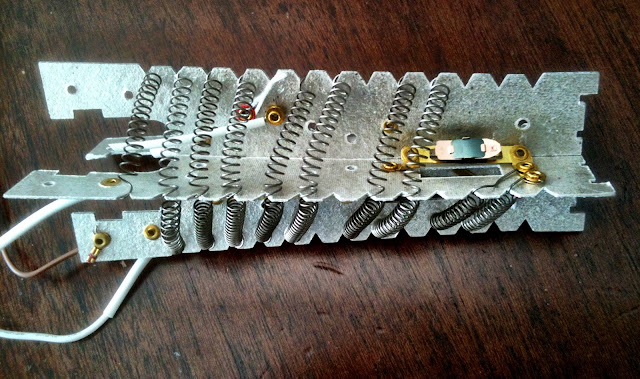 I was blown away (no pun intended) by how cheaply made this blow dryer is. The frame that the heating coils wrap around is two pieces of cardboard with a thin reflective coating so it doesn't immediately catch on fire!

With a healthy dose of duct tape and a few screws I installed this unit into the pipe that connects the blower fan to the the heater box: 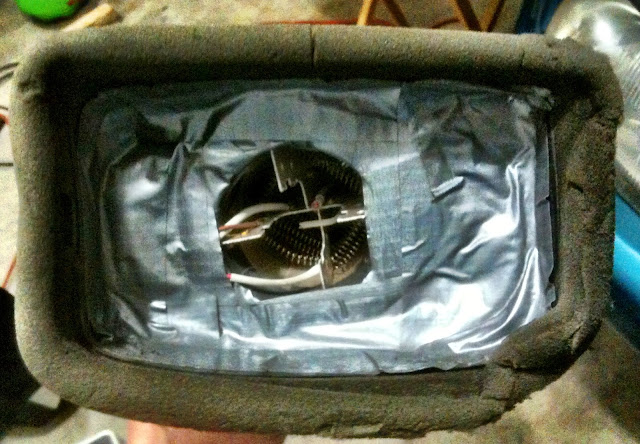 All of the blower fan air is forced through the ex-blow dryer. After installing this pipe back into the car, I decided to run a resilience test. I turned on the car's heater fan and plugged the hair dryer heating coils to the wall outlet for about 10 minutes. I am happy to say that the heater instantly blew warm air. There was no melting, burning, funny smells or fire. I pulled the pipe back out to inspect the duct tape and it looked good.

Instead of 120VAC, the heating coils will be powered by 72VDC in the car. That doesn't sound like a lot (40% less voltage) but I did notice that no matter what speed I ran the heater fan during the test, the air seemed to stay the same temperature, indicating that the bimetallic temperature control was hard at work doing its job. What this tells me is that 120VAC is way more than enough to maintain the target air temperature at any fan speed, so 72VDC will most likely be enough [at least] in the lower fan settings.

In other news, I spent lots of time making battery cables yesterday. I had plenty of 4/0 truck battery cable to do the job. Armed with a borrowed terminal crimper and 36 copper 3/8" battery terminals, I got it done. Today I made a bracket to mount the contactor (the main disconnect relay that all traction power goes through) and I mounted the controller. Once the control board (literally board. It's a piece of Ikea shelf) is more complete I will post pictures, mostly just to confuse everyone, including myself.
Posted by James Voth at 7:15 PM