Now for some technical stuff.

One of the things I had to do was reverse the direction of this motor because it spins the wrong way for my car. The most immediate question is: "Why don't you just reverse the polarity to the motor?" The answer is because a series wound motor will spin the same direction no matter what polarity you give it.

This is because when you reverse the polarity to the motor, it changes the direction of magnetism in the armature. But because it is series wound, it also reverses the direction of magnetism in the field at the same time. The result is a motor that still spins in the same direction. A series wound brushed motor runs fine on AC (alternating current) as well. Many small household appliances and power tools use them. (In case you care).

I had to un-solder and re-solder the cable on one power post: 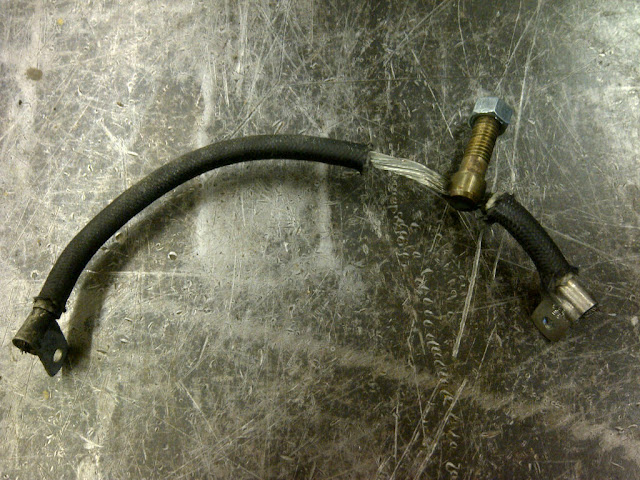 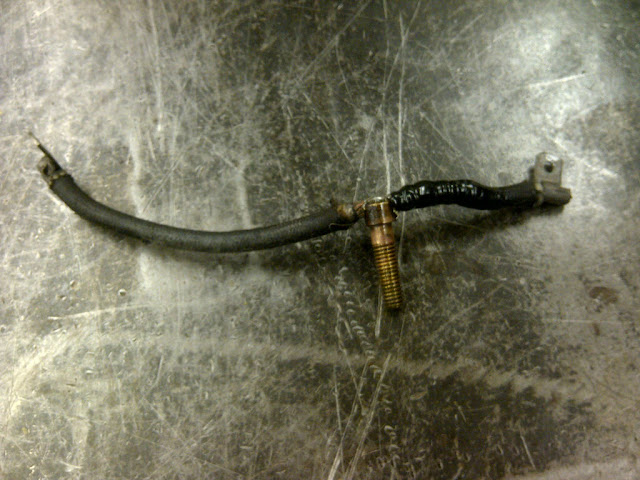 And bend one field power connector to hook it up to a different brush: 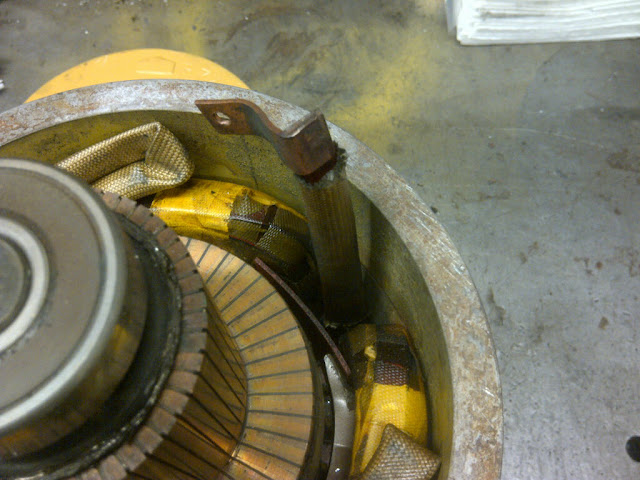 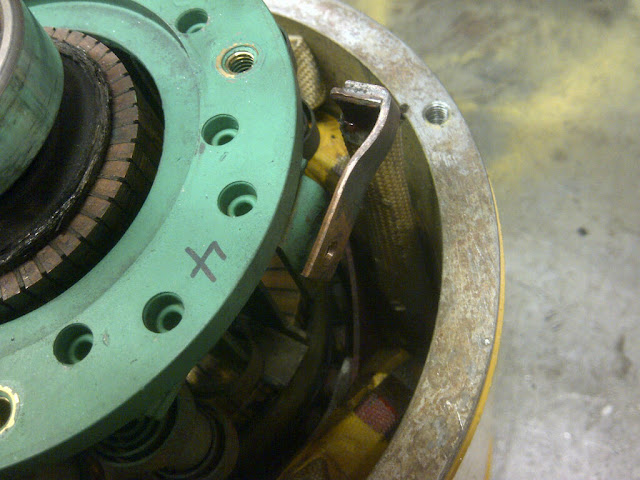 Now for brush timing. Brush timing is very important. As each commutator bar passes under a brush and current starts to flow into the armature at two points opposite each other, this must be timed perfectly so that maximum magnetic force against the nearby field shoes takes place. You would think that brush timing would be the same for every motor, but it is not. This motor has advanced timing, meaning that the brush is advanced when you compare it to the field pole, as you can see in this picture: 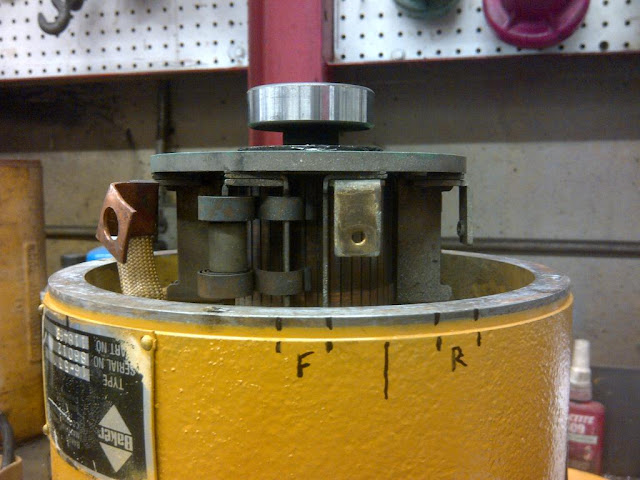 The long line is the field pole center line. It lines up with the field pole fasteners that are further down the motor body. You can see that the brush holder lines up with the "F" marks. I measured this timing to be 11-1/2 degrees advanced, which is about the max for brush timing. If I tried to run this motor without changing the timing, it would turn very slowly and the brushes and commutator would destroy themselves quickly. For the motor to have the same timing in the reversed direction, the brush holder will have to line up with the "R" marks: 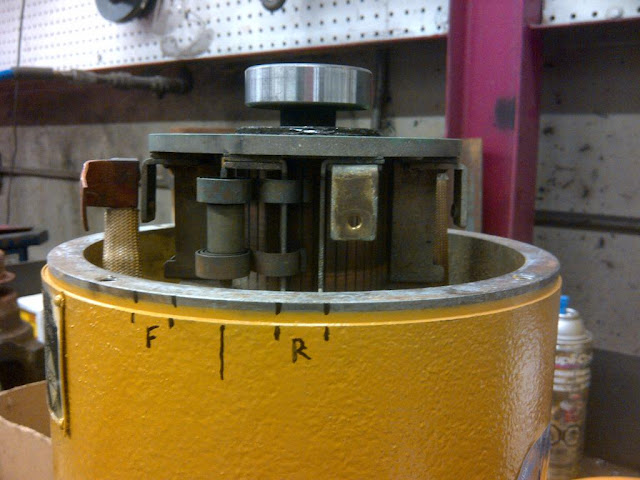 I drilled new holes in the end plate where the brush holder fastens to and it now looks like this: 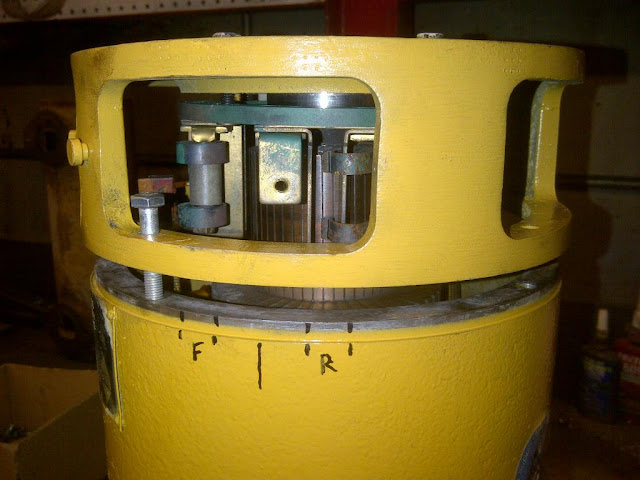 You can see the extra holes in the end cap where the brush holder used to bolt to: 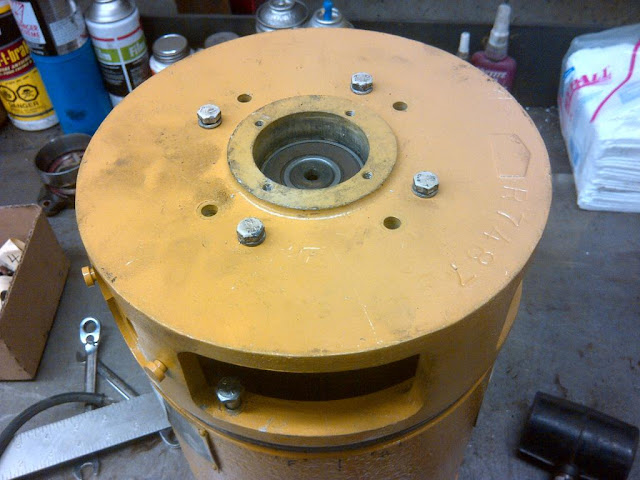 Why have advanced brush timing at all? Many DC motors have neutral timing and work fine in either direction. However, for reasons that are far beyond me, as you increase the voltage and speed in a motor (typically beyond what it was designed for), you need to advance the timing. It is sort of like a gasoline engine that needs more ignition timing as RPM increases. If you do not advance the timing in a DC motor, harmful arcing will occur between the brushes and commutator as voltage and speed is increased and quickly destroy the brushes.

After I got it all back together, I hooked up 12 volts to it to test it out:
It spins the right way! And it seems to spin at a good speed when compared to before I modified it, so it looks like I got the brush timing right.
Posted by James Voth at 2:08 PM